On the 14th of September 2017, the 100 meter long Spiral Spring, the only one in the world, was enclosed in its fame, making it ready for the control Ancillaries of the Mechanical Energy Storage System to be added to it.

The large Gear was also made ready so that it can also be linked-up to the winding side of the unit, after the Ratchet and the Free-wheel gear are installed.

This was a Land-mark day in the Progress of the ILIOS MESTOS Program that brings the Hybrid Motorcar Conversion to a point that begins to show a realization of the anticipated benefits of the invention. 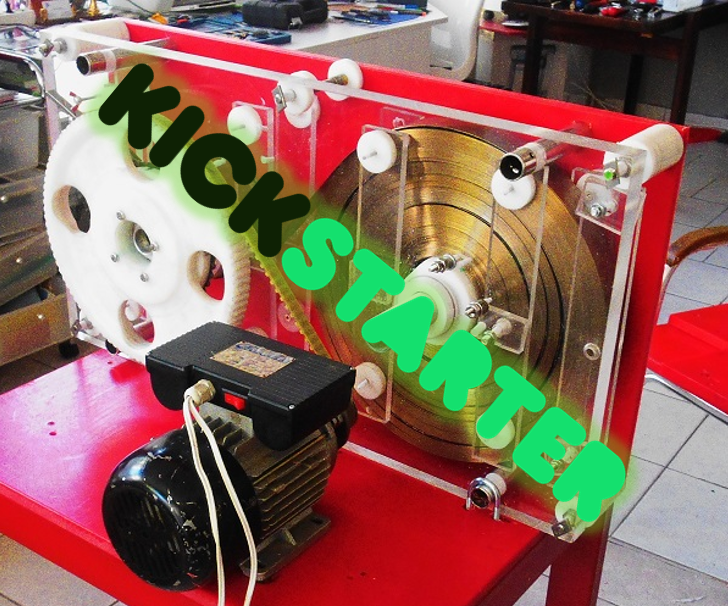 It gives us particular pleasure to announce that KICKSTARTER has accepted our ECOCAR, ILIOS MESTOS Project, which is now Live.

We have requested pledges of a reasonable £50,000 in order to complete our Project of fitting an ILIOS MESTOS 200 unit, with a 100 meter long Spiral Spring, initially into a Hybrid Motorcar like a Toyota Prius, after removing its batteries.

This Project is already on-going and its Progress will be announced in regular News Updates.

Today August 7th 2017, while there was a Full August Moon rising in the Sky, Vassili and I unpacked the 100 meter long Spiral Spring, the first and only one in the world.

We must tell the world that the English asked for 150k Euro to have it made!

We will now get down to work and get the Enrergy Storing unit ready, making the bobbins, the Plexiglas frame, the winding gear and the non-return Ratchet, while we locate a suitable candidate, to fit our ILIOS MESTOS device in.

This may be an old Toyota Prius, without the batteries, or a similar Hybrid, as a first step in the eventual totally Ecological ECOCAR.

We will post updates, every step of the way, with photos and videos, to keep our Investors and potetial Shareholders informed of the progress being made. 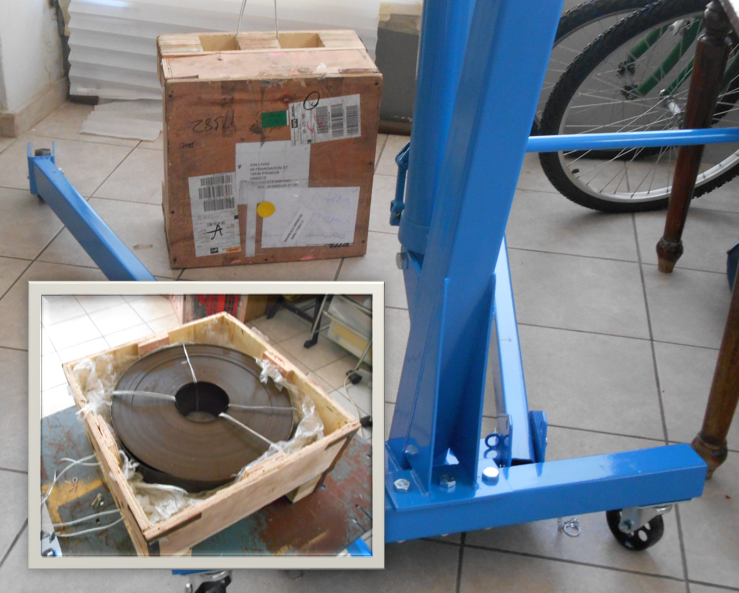 This is the 40 kW Mechanical Energy Storage System.

The Spiral Spring, seen behind the Plexiglas frame, has been wound a few turns, storing enough energy to demonstrate the unit in operation.

Here the ILIOS MESTOS is shown driving a Propeller, it could be a Generator or the motive power of a hybrid Motorcar, replacing the batteries.

There is no limit to the Energy an ILIOS MESTOS can store, it all depends on the size of the Spiral Spring shown coiled behind the Plexiglas frame.

An ILIOS MESTOS with the appropriate size Spiral Spring can drive a Plane, a Ship, even a Satellite with energy derived from the sun.

The simplicity and ease of construction of the Mechanical Energy Storage System, which is comprised of the Spiral Spring the two support bobbins and the non-return Ratchet, is evident.

The Gearing for the Energy return is standard and universal, as all applications will have a similar system independent of the size of ILIOS MESTOS Spiral Spring.

The aims and Prospects of the ILIOS MESTOS Program.

The practical and realizable aims of the ILIOS MESTOS Program are to harness the Mechanical Energy storage Potential of the hardened Spiral Spring as an integrated provider of Environmentally friendly Energy Storage.

Of the many avenues of endeavour that the Program can be harnessed for, the most important are:

Terawatts of Energy Storage capability, so that ‘ILIOS MESTOS’ units will turn Deserts into the Powerhouses of Continents for the Environmentally friendly fossil free production and long term Storage of Energy.

Keeping in mind the general aims and prospects of the ILIOS MESTOS overall capabilities, encouraged by the success of the Prototypes already available, the next step is to create a propulsion alternative with the one-piece 100 meter long hardened Spiral Spring recently made available.

Initially this will be for a unit that will replace the batteries of a hybrid Motorcar and subsequently to be the sole provider of propulsion energy for the Motorcar.

Additional longer and thicker hardened Spiral Springs will be made that will have increased Energy Storage capabilities. These will be applied successively to upgraded units requiring these energy storage capabilities, until the aims described above are reached.

There are two ILIOS MESTOS Applications that have now reached the final stages, the ECOBIKE and the ILIOS MESTOS 40 kW unit, both can be viewed at any time at Frangiadon 39, in Piraeus.

The ECOBIKE is a Mechanized bicycle that Stores Energy by Pedal-Power, by winding a specially designed hardened Spiral Spring located with the braking system and the power release at the hub of the bicycle.

The stored energy can be released by the Rider at will in order to negotiate an incline or on flat ground if he so desires.

The ECOBIKE has already been shown in several European cities, Belfast, Milan and Gstaad, as well as in Maranello the home of Ferrari.

It is hoped that a bicycle Maker will be found in the near future, to undertake the construction and Marketing of the ECOBIKE to fulfill our aim which is to get it known in every corner of the world and to earn a place in the annual production of bicycles.

The retail cost of the ECOBIKE will be less than one third of that for other Mechanized bicycles which are mainly Electrical, running on rechargeable batteries.

The ECOBIKE in its present form, has been made by 3D Printing the body, in 5 pieces which will eventually be made in Duralumin when Mass Produced, to earn its place in the bicycle world market, hopefully earning at least a 1% position within 3 years.

At present the annual bicycle production exceeds 150 million units, so that even a 1% Market share alone would allow the Company to go Public as the dividends and License fee returns would provide a substantive boost to the value of the Company Shares, allowing them to be freely traded.

The ILIOS MESTOS 40 is Mechanical Energy Storage device, using a hardened Spiral Spring, made up from six 20 meter long units, which were destined for the ECOBIKE.

The device has a ratchet, so that the Spiral Spring will not unwind until the handler requires it to do so. A system of several gears is located on the other side of a support panel, so that the energy released can be channeled to a single or several Applications, such as a Propeller, or a Generator or both.

The driving side has a free-wheel, so that the Plastic Gears will not turn when the Spring is being wound by a linked motor.

The present unit will soon be upgraded with a ONE-PIECE Spiral Spring 100 meters long, which will have Aluminium Gears, which are lighter and more durable.

This unit will now store 200 kW of energy and will eventually be installed in a hybrid vehicle, replacing the conventional batteries.

The Project to install the ILIOS MESTOS 200 will entail the following requirements:

It is estimated that a Budget of about Euro 80,000 will be needed, in order to convert the Toyota Prius, into a battery free Hybrid.

The next step, will be to remove the petrol/diesel engine entirely and have the converted vehicle to run with the ILIOS MESTOS 200 alone.

It is expected that with the ILIOS MESTOS 200, the converted vehicle will have a range of 500 km, or 5 hours of city and open road driving.

With this version of the Ecological vehicle needing no fuel whatsoever of any kind, it will be possible to have more than one spare unit in line to provide additional range.

For this conversion an additional budget of Euro 20,000 is envisaged, making the total budget Euro 100,000.

While this work is being carried out, the Industry will be kept informed and it is hoped that as soon as the first positive results are beginning to be obtained, the ILIOS MESTOS potential will be appreciated, resulting in offers to adopt the Environmentally friendly ‘new technology’ ILIOS MESTOS principle, by one or more car makers.