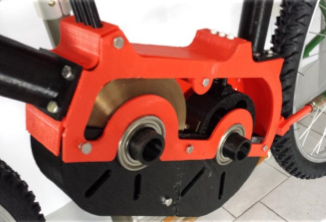 Description of the ‘ILIOS MESTOS’

The ‘ILIOS’ Mechanical Energy Storage System is an Ecological and Environmentally Friendly means of Storing Energy for short or long periods. This is achieved by winding on a separate bobbin, a specially designed Spiral Spring that converts electric energy supplied from the power grid to wind the Spiral Spring, into Potential Energy that can be later retrieved as required.

The ‘ILIOS MESTOS’ is inexpensive, as well as being simple to produce.  All its parts are MECHANICAL, the number of moving parts is only 8, requiring no Chemicals or Toxic substances in its operation, and producing no emissions.

The Stored Energy may be released at will, to power any and all devices needing a Power Source.

It is particularly suitable as a Marine Propulsion device, as the low RPM of the Propeller, lessens the size of the gearing required, when the stored energy is being released.

Although our particular interest may be to install it as a Marine Prime Mover, the ‘ILIOS MESTOS’ will power a new generation of Ecological Motor Cars, as well as Airplanes and other devices for a wide range of applications.

ILIOS MESTOS is a completely ‘independent’ integrated Power Storage Source and Supplier. And when coupled to Solar Panels or Wind Turbines, it requires no fossil fuel generated energy to operate.

When a ship is sailing and an airplane is flying, latest technology of rigid or flexible Solar Panels, will generate and renew (part or all) of the energy expended during the voyage.

These additional innovative features will be particularly useful when considering the ‘ILIOS MESTOS’ as a means for economical, feasible and long term propulsion for Spacecraft.

PS I have removed the word ‘reduction’ from the Gearing, as the Gearing actually INCREASES the RPM in comparison to the slow turning Spiral Spring.